SOME BEAUTIFUL HISTORICAL SITES AT JATINANGOR.

Jatinangor is the place where Padjadjaran University (UNPAD), Winaya Mukti University (UNWIM), Cooperative Management Institute (IKOPIN), and Interior Educational High School (STPDN) are located. Besides some beautiful structures remnants of colonial era worth to be protected and cared for are also found in this place. 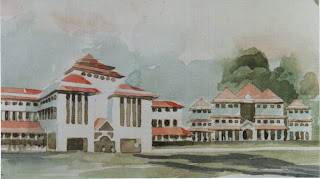 
When you drive from Bandung to Sumedang in W. Java, at kilometer 20, at the left side of the road you will find a big mosque with a minaret. This is STPDN mosque, a sign that you are nearing to what we are talking about. You proceed further about 300 meters and you will find a junction, you turn left. One hundred meters from the junction you will find Rectorate Building of UNWIM (now become Bandung Institute of Technology building). The beautiful building is of the beginning of XX century style architecture.

The roofs of traditional Indonesian style are large to protect the building from sun and rain. For hundreds of years, familiar with heavy rains and intensive sunlights, Indonesians made broad roofing for their houses. Combination of broad roofings and strong bricks walls is called Indo-Europeesche Architectuur Stijl by the Dutch. UNPAD, UNWIM, Bandung Giri Gahana Hotel with a golf course are of this type of architecture. If Dutch architects did'nt built this  style, sooner or later, Indonesian architects will, especially the broad roofings has been made by Indonesian ancestors for generations.
One hundred meters north of UNWIM Rectorate building you will find a Romantic style siren and clock tower with decorations on the four sides of its walls. According to a woman, daughter of the plantation worker, from this tower, long time ago, the rubber estate management announced when to tap the rubber and when to take the rubber bowl from the rubber trees by the siren sound every day.

Cultur Ondernemingen van Maatschapaij Baud was erected in 1841 by Baron Baud, a German investor who came to the Nederland's East Indie to build rubber Jatinangor plantation. Now at the back of the tower is Red Cross building built in 2010.

Vacant land north of the tower was formerly where Baron's Baud house and office were. People called it Loji, means castle. Cement made at that time was consisted of mixture of sand, lime powder, brick powder and yellow soil. Nobody knows what yellow soil was. The bricks are solid, bigger size, less air pores weighted 2.1 kg compared with local people made bricks which are porous, smaller and weighted 1.1 kg. People made bricks are of mud from rice fields which contain small particles of straws and organic matters. It seemed that Loji's brick were made of less humic soil and possibly was ground before patterned and burned in the kiln. After bricks were taken from the kiln, they were washed and brushed before being applied to make the walls. The groundplan of the Loji was an L shape with 13 rooms. Around the Loji many rare tropical fruit trees were planted. Fifty meters west of the tower under the very old Ki Hujan, mahagony, and pinus trees you will find Baron Baud and Mimosa gravestones. 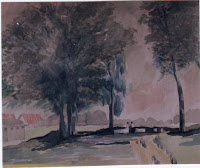 Kuswandi a historian devotee of PT. Perkebunan XIII, have submitted an article and photos which showed Mimosa and her father's friends in an outdoor meeting in Pikiran Rakyat newspaper some years ago. Mimosa was a tall Asian face woman of bloods mixture of Baron Baud's and a Sundanese woman originated from Bogor whose name was Inciah. Mrs. Inciah's gravestone have vanished at the bottom of STPDN building.
Looking to the south from Bandung Giri Gahana golf course you'll see Geulis Hill at the left side, textile industrial areas of Rancaekek and lowland of large rice fields. These ricefields were formerly the floor of Ancient Bandung Lake which was existed between 125,000 to 5,000 years b.C. East of UNPAD campus there is an old Cikuda train bridge which was built in 1918 by Dutch Kingdom's Staat Spoorwegen.
This bridge was made only of bricks, no iron and the bridge is turning, not a sraight bridge.

The tracks connected Bandung-Rancaekek-Jatinangor-Tanjungsari to carry plantation products from around Bandung to the harbor of Cirebon. The rail never reached Cirebon because of the Great Economic Depression in 1930.
According to Haryoto Kunto in Wajah Bandoeng Tempo Doeloe this Cikuda bridge had not existed anymore. People carry their merchandises and students go and comeback from UNPAD campus pass this beautiful turning old bridge. The siren tower and the bridge and the graveyard are worth to be preserved for education and tourism purposes.*