As a young boy of 11 when I visited my grandmother who had moved to Cilacap in 1951, I was amazed of seeing so many ship wreckages in the Strait of Nusakambangan. Later I was told that those scrapped iron were torpedoed Allied ships fleeing from the harbor of Cilacap on the 4th and 5th of March in 1942 during the World War II.


The harbor of Cilacap is located at the south coast of Java and is shielded from the open Indian Oceans by a small island named Nusakambangan. From this port Allied forces planned to evacuate all personnels.
On December 7th 1941 Japan Navy with radio silence stealthily attacked Pearl harbor and sank USSs Arizona, Oklahoma, California, and West Virginia, and later HMSs Prince of Wales and Repulse were sunk near the harbor of Singapore. Not long after that HNLMS De Ruyter went down in Java Sea with its commander Admiral Karel Doorman. HMAS Perth and USS Houston were sunk in Sunda Strait, USS Langley and USS Pecos were bombed, damaged and sunk in Indian Oceans in a relatively very short time.
The advancement of Japan industries needed raw materials and energy. Preparations to fill this needs were made at least 10 years prior to their aggressions. First many Japanese traders and professionals were sent to many Asian countries including to the Nederland's East Indie by Japanese Kingdom. They were disguised of their real purposes. Their duties were to influence the people then under the Dutch colonialism to have fellow feeling with the Japanese Kingdom whom they said will help the people to get freedom from their colonizer. Covertly those political intelligent agents told Indonesian people that "Asia is for Asians", "Japan is elder brother of Indonesians" and some more spark of life slogans. Dutch anti intelligent department, IVG, (Inlichtingen en Veiligheidsgroep) did'nt find any evidences that those Japanese traders and other professionals were dangerous to the Dutch Government. Ten years later when the Japanese Army landed in many parts of the Nederland's East Indie, the influence of those agents showed its results. Japanese Army were hailed, at least for a very short period of time, as freedom fighters. No resistances were made by local people against them. And that was enough for the Japanese to make a foothold in this country.
Two to three years before the Japanese onslaught to the Nederland's East Indie, new waves of military informers came to this country with different kind of assignments that were gathering various Dutch military information such as number and kind of armaments, number of personnel, organizations, civil defenses, and volunteers. Also under their surveillance were airport and harbors conditions, locations, condition of roads and timing of dry and wet seasons and even ebb tides and full moons. One year later those agents received unassambled transmitter and receiver radio equipments through secret dispatching methods. Meanwhile the topographical shape of the very narrow Nusakambangan Strait, where ship must pass it from west to east or vice versa, when they enter or out of the port had been known and memorized by the Japanese pilots.
Fierce fighter planes with flying range of 1,800 km and speed at 400 km/ hour which Allied called Val or Aichi D3A1 made by Mitsubishi with single 250 kg bomb under their bellies were standby somewhere, possibly in Yogyakarta. When time came, within 30 minutes those fighters could raid the fleeing ships mercilessly like had happened four months before when this kind of airplane destroyed Pearl Harbor.
On February to beginning of March 1942 many families of Dutch government officials and America-British-Dutch-Australia Command (ABDACOM) came to Cilacap in their preparation to flee from Java to India or Australia if situation gone wrong. The high ranking officers stayed at Bellevue Hotel (now Hotel Wijayakusuma), the lower officers stayed in other other few buildings. Tents were erected at not many squares and open fields. Many of the wives became much worried when they heard that Singapore surrendered to the Japanese.
On the 4th and 5th of March 1942 some convoys of passenger ships and cargo ships embarked from the harbor escorted by warships.
Hearing the enemy's radio commotions and seeing the embarkations, Japanese agents who had been ready with their radio transmitter sent their coded messages to their contacts. 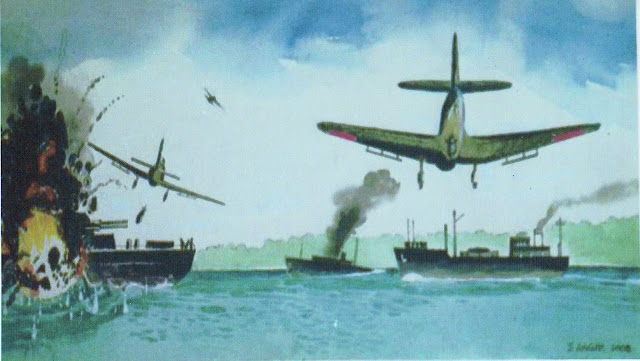 
When the convoys were almost reached the open sea, more than 20 Val dive bombers in 3 formations groups attacked the fleeing ships from the north to obtain wider target range but with shorter time to aim (Picture 2).Javanese fishermen who had just coming back from the sea were amazed, shocked and frightened seeing and hearing the exploding torpedoes around them, they were in the middle of real fightings -not from film scenes in the cinema where two high tech Aliens were fighting- but between two groups of human kinds their armament beyond the imaginations of those poor and primitive colonialized fishermen. Because of the air raid, thousands of civilian passengers were wounded and died with minimum of helps. Later high altitude bombers Mitsubishi G3M Nell, the kind of bomber which sank HMS Prince of Wales and HMS Repulse, bombed the harbor of Cilacap.
Three days later Dutch Government in East Indie capitulated to the Japanese Army.In the pleated-bamboo walled mosque in the fishermen village the Imam explained the prayers that Lord the Supreme Planner turns the glories and dooms among human kinds.


The signs of the Dutch Government crumbling in the East Indie were showing. The national activists were asking to themselves what would they do to free their people from greed, discrimination and ignorance.*