REMEMBERANCE TO 127 YEARS OF KRAKATAU ERUPTIONS.


August 127 years ago was a sad moment for people who lived near Sunda Strait and its vicinities. About 30,000 people died because of a very horrifying disaster when Mount Krakatau erupted. The active volcano which one the crater lies submerged in the sea, have a profound interest among geologists. Before May 1883 this volcano had shown its increasing activities.
According to Neuman van Padang, the eruptions had spewed cloud of dust and vapor as high as 1,100 meters. At the beginning, the activities were from Perbuatan crater and then were followed by other craters. On August 27, 1883 at 10 a.m. Krakatau exploded and spewed ash, debris, pumice and vapor (Picture). 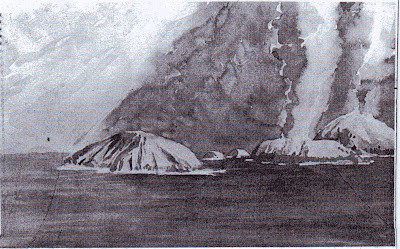 Central crater, smaller and the submerged one, exploded at about the same time. Sea water blown by the eruptions resulted deluges in all directions to make first tsunami. The spaces vacant under the sea were then rushed by surrounding sea water. Surging shocks of sea water under the surface made another deluge of sea waves to shores. According to K. Kusumadinata, an Indonesian vulcanologist, the ejecta volume spewed was 18 cubic kilometers as high as 80 km to the atmosphere. The sound of the eruptions were heard 200 km away. Exploitations were heard in Singapore and Australia. National Geographic Magazine wrote that there was decreasing of earth temperatures because of the blocking of sunlight by the ash clouds.
The explosions were number three in term of ejecta volume spewed to the sky. The number one was from Mount Tambora, also an Indonesian volcano, which blew 80 cubic kilometers of ash and pyroclastic in 1815. The explosions made by Tambora decreased significant earth temperatures so that in 1816 was a year without summer in the US and other parts of the world and causing decreasing agricultural harvests. Number two explosions was from Mount Mazama in Japan in 4,600 years b.C. which puked 42 cubic kilometers of debris and ash.
Tsunami waves made by Krakatau eruptions was as high as 30 km at the speed of 800 km/ hour rushed to Lampung and Banten shores. A steamship Berouw cruising Sunda Strait was washed to the forest 3 km from the shore of Lampung. Nobody remember how many passengers lost and died in this ship. Railways in Banten near the shore were twisted like toys. Human, cattles and pet corpses laid everywhere. According to a vulcanologist whose name I don't remember, the explosions of the submerged crater and the crumbling of the crater's walls beneath the sea surface made the most destructive tsunami and made a large caldera. Long distance weaker tsunami reached South America.
Without knowing of the history, tourists will wonder of seeing a fallen lighthouse that located far from the shore of Lampung.
Some informations stated that 36,417 people died instantly because of the tsunami. More victims were starved, injured, sickened and finally died. Luckily 127 years ago population was not as dense as it is today, otherwise the victims would be many more. According to Stehn, a geologist, Danan, Perbuatan and Rakata islands and their craters vanished from sight and only a small hill left after the explosions.
After those horrifying occurences it didn't mean that Krakatau would be inactive. Max Sons an oil company employee who flew passing Krakatau on June 1972 reported an eruption which blew smoke of ash as high as 3 km. Next morning the cloud was seen from 80 km distance. A flying company navigator who flew from Jakarta to Singapore on December 1972 reported sparks from Krakatau crater. On the same month K. Kusumadinata saw two sources of sparks from Carita beach and Pasauran. Usman Sadili, a policeman reported that he saw 1,600 meter smoke soared to the atmosphere on January 1973. At the same month another witness, Hamidi, saw 1,500 meter high mushroom shape cloud from the short cone of Krakatau. The smoke is very dangerous to airplanes since if it is sucked it can block the machines. Geologists whose profession are monitoring the volcanoes always at the ready to contact Department of Transportation which in turn will make notice to the airmen and pilots when there were emergency situations.
Krakatau is still and always active. It has everlasting intermittent explosions which attracts domestic and foreign tourists. In 1979 Harry Stockley of Dow Chemical Company sailed to Krakatau with his Indonesian friends, landed on its beach, took photographs of smoldering debris fallen near him and sailed back to Carita within one day travel. I don't know whether Harry knew that the temperature of debris was 600 centigrade and can kill.
On Nonember 2010 European tourists boarded some ketches and sailed near the beach of the volcano to see the eruptions.
After producing a caldera in 1883 eruptions geologists stated that similar eruptions might happen again after 2,000 to 3,000 years to come. Some other geologists stated that no volcanoes in the world will produce a caldera twice. Directorate of Vulcanology and its personnel should have adequate number of modern equipments and they should have proper take home pays so that they can focus on their jobs. Their posts are located at lonely and dangerous places, and they have responsibilities to save people when the bad things come. By facilitating to make them focus on their jobs, unnecessary possible victims can be avoided*